From The Desk of John Licari: Do What is Right

I was thinking today that we are coming up on the second anniversary of when the world changed very quickly. It was early 2020, everything seemed normal, and then one day it wasn’t. We were asked to stay home, we were deemed essential or nonessential workers, and we were told to be very careful because an unknown virus was infecting people around the world.

Nobody really knew what to do, and many people were worried. Nonessential businesses were shut down, and essential parts of each business were allowed to remain open. Total Life Changes is primarily an online seller of health and wellness products. We worked from home and continued operating, except for our shipping and receiving department, which was asked to process and ship a record-setting number of orders every day.

With everyone at home and worried about their health, the number of orders we received every day was unbelievable. But that also came with another challenge: the number of people we had to help us process those orders was very limited. Many were scared to come to work, and they chose to stay home, and we understood and respected it.

Others wanted to work, but since they had elderly parents or grandparents at home, they decided maybe it wasn’t such a great idea. We found ourselves in quite the predicament: lots of orders but not enough people to send them out. It was time to roll up our sleeves and put on our thinking caps too!

Jack and I and the rest of the executive team immediately decided to become everyday workers in the shipping department. We worked every day alongside the brave men and women who showed up to work every day. It wasn’t easy for some of us, but we knew it was the right thing to do. Not just because we had so many orders and the customers deserved to have them fulfilled but also to show solidarity with the other TLC family members as they continued to show up to work every day.

Those were long hard days. It was seven days a week, and many of us were putting in 16, 18, even 20 hours a day. This lasted for several months as we continued to try to keep up with demand. To this day, it was one of the most memorable few months of my life. We learned a lot about ourselves, and we learned a lot about the amazing people that we worked alongside every day.

Every day we had a goal, and that goal was to simply do whatever we could within our power to get as many orders out as possible. We knew that some people were waiting for three, five, or even eight days to get their order processed, and every single extra order we were able to get out every day was going to make one extra person happy.

One day in April 2020, we were doing a great job processing and shipping orders. For whatever reason, on this particular day, we were on a record pace to process and ship more orders than we had ever done before. We were so happy and high-fiving throughout the late morning and early afternoon because it felt so good to be able to satisfy so many customers.

Then something unexpected happened. We received a call from UPS that the late truck from UPS would not be showing up. We had worked so hard, and now thousands and thousands of the small parcels were sitting in the aisle with nowhere to go. To say that we were demoralized was an understatement. We were staring at 10,000 finished parcel orders, and there was no way for us to send them on their way.

Then we started thinking, and we started making some calls. We found out where we could drop off the packages ourselves, and we were determined to get them there by 7:30 PM because we were told that’s the latest that they would process them. This was when our years of Jack Fallon training kicked in. We knew what we wanted our end result to be now all we had to do was take massive action.

We did what most would do; we called a good friend. His name is Dean Williams, and he was at home since he was a nonessential worker. Dean had a big truck and an extra trailer that he offered to bring to TLC to be filled with packages. He showed up an hour later, and everyone stopped to help load the truck and the trailer with as many packages as physically possible. Then another issue, it started to rain so we also needed to cover some of the packages so they wouldn’t get wet.

Everything was going against us, and we were running out of time, but we were determined not to be defeated. We loaded the truck and trailer with not one extra minute to spare. Dean arrived at the UPS location, and they were shocked. Never had anybody come there to drop off that many packages before. We broke many records that night but more importantly, we served as many customers as possible. The packages made it into the system of UPS and started moving that evening.

Thousands and thousands of customers received their packages one or two days earlier than they would’ve if we had not done this. And I think deep down inside, we knew that most of them probably would never know, nor would they be upset about a one or two-day delay. For us, though, it meant everything. We spent long hard days processing as many orders as possible every day and staring at our core values which are proudly displayed throughout the building.

The one that kept sticking out was the one I’m writing about today. “We don’t just do what’s easy; we do what’s right.” It was such a joyous evening, and it wasn’t because we accomplished something that was hard to do; it was simply because we all knew we had done the right thing. It also changed everyone’s attitude for the next several months. That night unified us, it invigorated us, and it reminded us what our place was in the world.

We were life changers, and our job was a responsibility to do our best every day. And we certainly did our best! Looking back, I remember I did not doubt that the men and women beside me that day would be amazing, but I never imagined that someone from outside our company would be inspired to come and help us.

That’s the day I realized these core values are not just for us but there for us to share with everyone else. We don’t just talk about these core values, we live them, and because of it, we are inspiring others around the world to live by them as well. A special thank you to Dean Williams and to all of you out there who have helped Total Life Changes serve and love every day!

Thank you for your love and support and for reading each week! I hope I inspire you from time to time to be your best and to do great things! Have an amazing week! 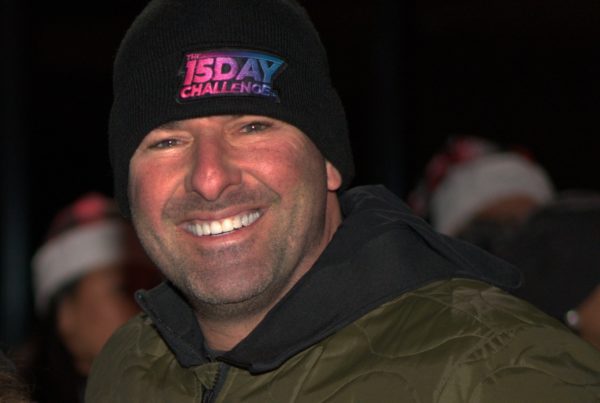